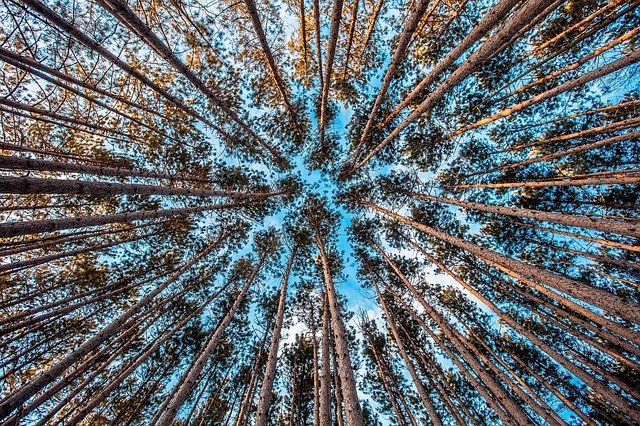 Let's be honest, the innovation performance of most companies is abysmal. Lots of money is spent on creating a culture for innovation and even more money is poured into innovation projects. Nevertheless, the innovation unit is a cost center. As a result, in a time of crisis like now, when you need innovation the most, you cannot rely on it. Especially now, organizations need an innovation process that delivers. Always. That is possible if you consider innovation a process for personal and organizational growth instead of a process to deliver new products and services. And you can start doing that today.

The current innovation culture is broken. It requires everyone to be engaged to create a culture for innovation, with nobody being held accountable. And because fail fast is an acceptable outcome, everyone can avoid blame for projects that lead to nothing.

While creating a culture for innovation is a laudable goal and the fail-fast concept has its merits, together it creates an ineffective mix that is costing organizations a lot of money and that helps nobody.

Worst, innovators don't get the credits for the time and effort they put in, innovation managers are put for an impossible task, and the organization sees the costs but no financial return.

Take Sheila, an ambitious energetic innovation manager who lasted less than 2 years in her position. When we chatted at a networking event, I asked her what her key performance metrics were. She told me, "Honestly, I don't have any. I am tasked with building a culture for innovation and that is difficult to put in metrics. I wish I had some, as that would give me more guidance". When I ran into her again 2 years later, she told me that she had resigned from the company. In spite of the many workshops, brainstorming sessions, and other events she organized, no new products or services had been launched that could cover the costs of her salary. In mutual agreement, it was decided that it was better for her to leave the company.

Regardless of whether Sheila would have stayed or not, there are many organizations in situations like this, with an innovation process that does not deliver.

Innovation as an opportunity for growth

To be clear, I am not redefining innovation for wordsmithing purposes. Neither am I framing it as a learning experience to make it look softer and the goals easier attainable. I am reframing it as an opportunity for personal and organizational growth, to create an innovation process that delivers results. When innovation is considered a learning opportunity, you can put metrics around it that make the process transparent. With such transparency, it becomes possible to hold teams accountable, and by holding teams accountable you will get the best possible innovation results. Always.

One of the challenges with the current approach to innovation is that it is very difficult to put metrics around it. If a team is held accountable for the end result only, there are little controls in place along the way. How do you evaluate the progress on developing a new product or service that does not yet exist? Yes, you can ask for customer feedback and do focus groups, etc. But how do you know how well you are progressing toward success throughout the innovation journey? That remains extremely difficult to tell.

However, we all know how to put metrics on learning progress. In school, in college, we have been put to the test. And the school system is pretty good at identifying the smartest and the best students. Even better, teachers know who is falling behind and may need more help to succeed.

So, let's apply those same learning principles to an innovation project. It is not too difficult - especially if you use an online program - to follow the learning progress of a team. You can oversee how diligent they execute their tasks, compare the effort they put in, etc. That way, just like in school, you can identify the best from the mediocre teams.

Just like students, teams themselves know when they are underperforming. Unlike school, innovation teams can stop and avoid wasting time and effort on a project that is not meant to be. What more, innovators can take as many attempts to start anew and do better. Which is exactly what happens with innovators who are denied funding the first time around (source).

So by framing innovation as a learning experience, you know what teams do, learn, and deliver. That makes it possible to compare the effort and learning abilities of teams and hold them accountable for their performance.

The best way to develop and test your talent pool

Leading and participating in an innovation project is a great opportunity for personal growth. You learn new hard and soft skills.

Yet, unlike personal development programs, participation in an innovation project gives you the opportunity to turn this learning into millions of dollars in new revenue. The chances of that happening may not be high, but it certainly is possible.

You can compare it with the minor and major leagues in baseball. Before investing in and letting players play in the major league, they are tested and vetted in the minor league. Similarly, you start giving your talent the opportunity to prove themselves in the early phases of the innovation process, so they are ready when it is time to invest in the development and implementation of these new solutions.

Not everyone will make it as an innovator and not every innovation team is meant to be. But at a minimum, by framing it as a learning experience, each innovation project offers an opportunity for personal growth.

Innovation is an investment in the future of the organization that needs to have a payoff. Especially in a time of crisis, an organization should spend its money wisely.

By framing innovation as a learning opportunity, you have better criteria to make your investment decisions. An example will help to clarify.

Take the project of John. He has identified a great new opportunity. It will cost $500k to develop and upon success, the expected revenue will be $2M at least. An investment in an innovation project with a potential 300% return on investments sounds like a great deal. The team is given $100k to proceed.

Delivering according to the plan, the team continues development. Six months and $400k into the project, it turns out that the development costs were underestimated in the initial pitch. They need another $300k. Nine months later, the team comes back with the announcement that the revenue projections were too optimistic. In total, the return will be about $1M. A return on investment of 43%, which is still not bad.

However, if known at the start, would the company have invested $700k in this project? Or were there more promising opportunities that should have gotten this funding instead?

Innovation as an opportunity for growth:

Instead of investing your money in the project that has the best predictions, let's now invest in the best opportunity for growth. It is similar to how you would invest in personal development. However, this time you evaluate the growth opportunity for the individual and the organization.

The same project of John, with the same outlook. However, this time, you take the projections with a grain of salt, because you know they are probably off. Instead, you look at it as an opportunity to learn. John is a talented guy with original ideas. He could be one of the future leaders of your company. The opportunity he plans to go after is an interesting one for the organization, as it would give access to a new client base. Therefore, you decide to put John to the test. You give his team $15k to explore the feasibility of this $500k project, set-up a small team, and develop the business case.

Two months in, the progress metrics tell how much effort John and his team put in and what they did to learn as much as possible about the opportunity. Their efforts show in their business case. They found out that it will be more difficult and complex to develop the new service, because the software integration is more complex than they initially thought. By talking to clients, they learn that while there is a problem with the current solution, the problems are not as pressing as they thought it would be. These facts can be discussed openly because John and his team know that is in their best interest. Their project will not be evaluated by what could be, but by what they have learned.

Management gets the business case and the statistics on John's team. The data show that the team scores in the top 10% of teams ever going through the program.

With the $20k investment, the organization learned that it will be more expensive and that the opportunity is less attractive than thought. Given the facts, it seems the project won't be the career-maker John had hoped for. Management is reluctant too. They are about to abandon the project.

Looking over the list of assumptions, one of the senior managers sees something that appears odd to her. By phrasing the statement differently and relating it to an adjacent market- making a small pivot - she thinks there may be something there.

Because the team has worked so diligently, has proven their worth, and because the comment of the senior manager rings true, the team is given another $15k to test this new assumption about the adjacent market.

Three weeks later the team comes back with an updated business case. The development costs are estimated to be $700, yet, the size of the problem has grown too because of the opportunities in the adjacent market. Now it is estimated to possibly be a $2.5M opportunity.

Given the past performance of John and his team, management feels confident in giving the team $100k to reach their next milestone. Because as Ed Catmull said "if you give a mediocre idea to a brilliant team, they will toss it out or come up with something better".

By reframing innovation projects as a learning opportunity, you expect your teams to learn, you can evaluate teams on their merits, and challenge them to come up with better solutions.

An innovation process that delivers

Why is it important to redefine innovation as a learning experience? McKinsey found that just 6% of companies are satisfied with their innovation results. That is unacceptable. It is therefore time for a new approach to innovation, an innovation process that delivers and gets you the best possible results. Always.

Below the differences are summarized between innovation defined as new product development versus an opportunity for growth: 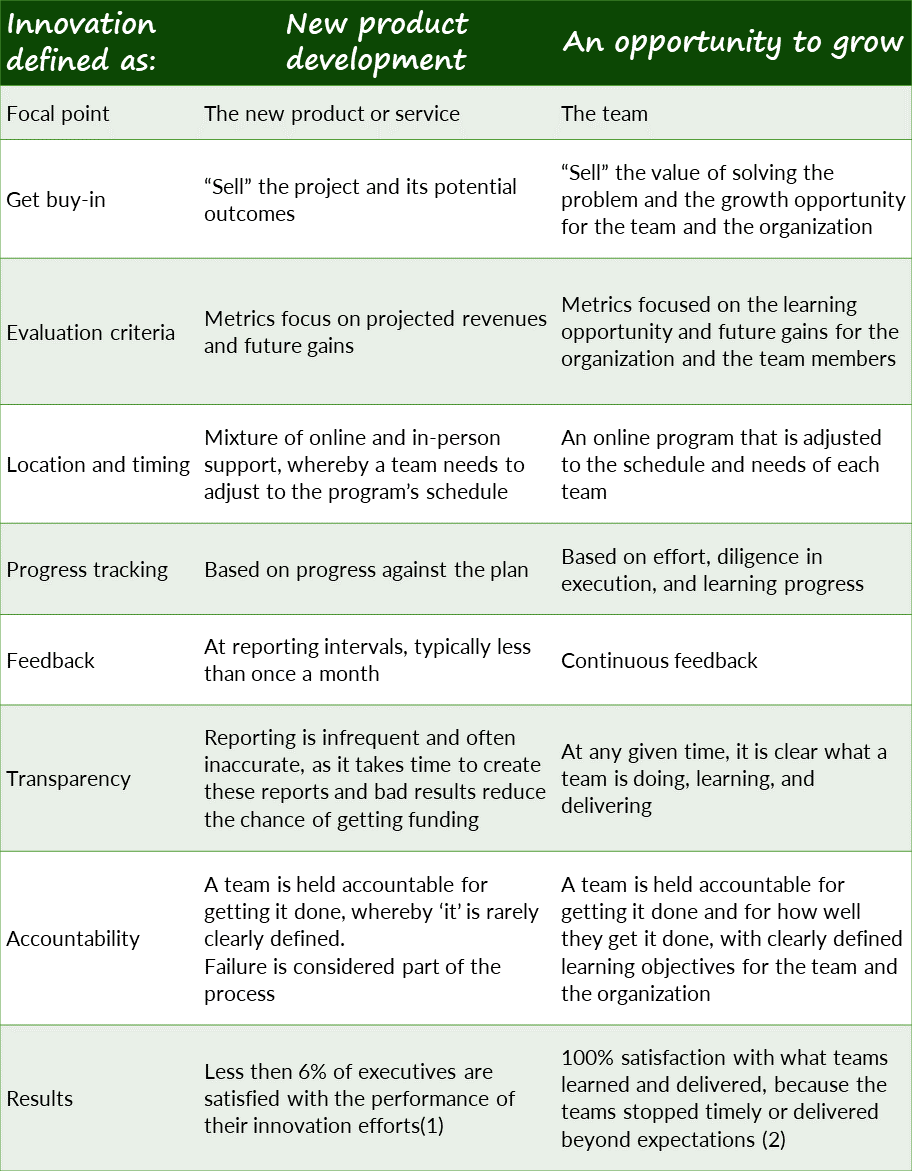 Want to try it out?

Redefining innovation as an opportunity for personal and organizational growth is not that difficult to do. The only thing that it requires is an online training program that enables you to track the learning of your innovation teams.

Currently, there is the opportunity to experience how this works for free, for the first phase of our T4 online innovation training program. The program lets participants work as a team, test their ideas, and create a business case, under the guidance of an experienced trainer.

That is how at Organizing4Innovation we turn innovation into a unique learning opportunity and create an innovation process that delivers results.