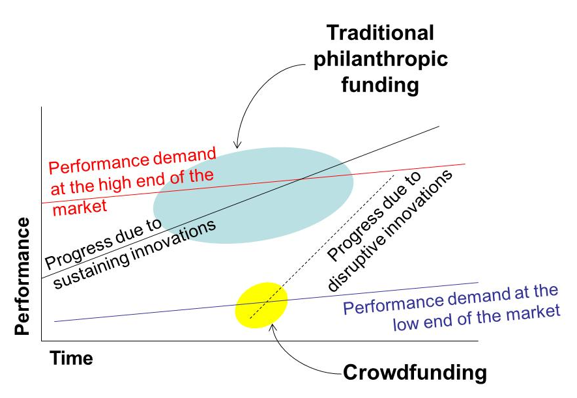 Crowdfunding Propels Research was front-page news this week in The Washington Post.

What is crowdfunding? Is your organization, or are your your researchers and inventors, missing an important opportunity?

Crowdfunding is web-based fundraising geared for specific purposes and projects. Crowdfunding allows large groups of individuals to fund specific projects or initiatives through incremental online donations. Social media networks are often utilized to reach the target population and the funds raised are specific to individual projects. If a crowdfunding project does not reach its fundraising goal, all funds are returned to those who pledged.

The success of well-known crowdfunding websites such as Kickstarter and IndieGoGo speaks for itself. However, there are some drawbacks to be aware of. For example, Kickstarter does not allow medical or health care-related projects. And Indiegogo has a penalty fee of 9% if you do not make your target. So think twice (and plan ahead) before launching a campaign.

We ran a crowdfunding pilot at Children’s National Medical Center in 2012, to learn more about crowdfunding as an alternative funding source. From a funding perspective the pilot was not very successful. In total a little less than $11,000 was raised for four research projects, far from what was needed to support the work. None of the projects got fully funded. However, the pilot provided valuable insights into the workings of crowdfunding.

None of the investigators was able to reach the “crowd.” The investigators did not have the social media reach needed to raise substantial amounts through crowdfunding. To have a chance at being successful, you need to have at least 1,000 social media friends in your network, and to have secured about 1/3 of your funding needs when you start the campaign. Without such a big bang, your campaign will be lackluster.

Crowdfunding is not as cheap as it may look. Putting an effective campaign together is time-consuming for the innovator or researcher, not least because they are not used to writing persuasively for a general audience—a skill needed to make an attractive statement. This work can of course be outsourced, but that adds to the cost.

There are also hidden costs. Read the small print of the crowdfunding platform. There are fees for funds raised (3-7%) and fees for funds not raised, i.e., a failed campaign (0-9%). In addition, there are credit card costs (2-5%).

If you promised gifts to donors, those need to be produced and distributed. Shipping costs can also take another share out of your funds raised.

Crowdfunding may still be too “disruptive” today to be an attractive fundraising mechanism. Disruptive innovations are characterized by smaller target markets and lower gross margins. They also tend to be simpler, less attractive products. All of the following characteristics also hold true for crowdfunding: At the same time, as we know, disruptive innovations have the opportunity to threaten incumbents (Christensen, 1997). The question is: When? The answer to this question will differ from individual to individual and from organization to organization.

Mollick, E. 2013. The Dynamics of Crowdfunding: Determinants of Success and Failure.