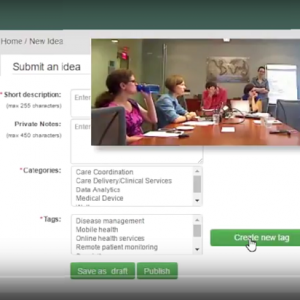 In July 2016, 14 participants started the same 6-week online Innovations in Telemedicine summer course at the George Washington University, facilitated by the O4I- training platform. The participants were all busy professionals; 4 were practicing clinicians.

Teams are the key to success when bringing ideas to practice. However, forming and working in such multidisciplinary innovation teams is often troublesome and time-consuming. It is stressful to select suitable teammates, challenging to find common ground, and difficult to make everyone pull their weight in a process already fraught with uncertainty. No wonder that so few innovation teams are actually successful in developing viable ideas.

Imagine how much easier it would be to form teams and bring ideas to practice if the process was structured and facilitated using a software platform.

Before using the O4I- training platform, participants were divided into teams by the course director, Dr. Sikka. The teams had many issues and required time-consuming hand holding.

For the first assignment, the participants had to submit 10 or more telemedicine ideas. Next, the participants were invited to create projects around a problem or need. The software matched each project with ideas and potentially interested team members.

During this project team formation phase, 6 projects were initiated, with 36 invitations sent to the 14 participants. As a result, most had multiple projects to choose from. Within one week, everyone joined a team, and all teams consisted of at least 3 team members with different backgrounds. These teams would later be qualified by several participants as the “best team I ever worked in.”

“The innovation concepts were not as broad or wild as some in the past, but were well-defined, realistic, and executable. Two of the four teams decided to continue and invest their own time and money to bring their ideas to fruition.”

The results speak to that as well. The platform was not only used to form teams, but also to guide these teams through the ideation phase. “Well thought-out online education modules” addressed 8 topics that together formed the chapters of the innovation proposal. Each topic built on to the other, with a testable concept as the end result.

Weekly progress reports kept the teams on task. They also enabled the teams to strengthen weak areas. By the end of 6 weeks, 4 testable concepts were presented, with each concept substantiated by data.

As Dr Sikka noted, “The innovation concepts were not as broad or wild as some in the past but were well-defined, realistic, and executable. Two of the four teams decided to continue and invest their own time and money to bring their ideas to fruition.”

The software also provided insights into team learning, which is important when having to make a go / no-go decision as a manager. Team learning is a defining factor for innovation success.

Perhaps most importantly, the O4I-training platform streamlined the process, saving time, aligning tasks, and motivating team members, helping them to be successful in their innovation endeavors.