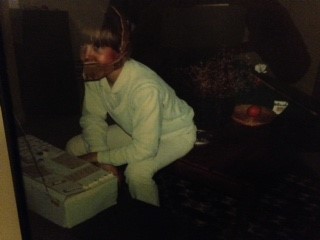 Last week, David Powell shared his concerns about my blog “Need new tactics”. He wondered whether the current hype is all that different. He shared with me his personal experience with digital transformation. Walk along through history and judge for yourself, has digital transformation always been just about sifting data?

The part of the blog that triggered his reaction

In my blog, I wrote: “Don’t confuse digital transformation with the move from analogue to digital signal processing that happened decades ago. For most service firms, this meant replacing old equipment with a modern, smaller digital version, such as for example rotary phones. No fundamental shift in strategy or culture was needed to accomplish that transformation.”.

Sifting data and the impact on strategy and culture

I asked for permission to share the following story. The headings are added for clarity.

“I fully appreciate your comment is aimed at folk like me that consider digital transformation started with the advent of digital signal processing, however that was the start of being able to sift easily through data, as I explain below, there was a huge shift in strategy and culture.

What you are referring to in your blog is just sifting through data, data is just stuff being stored, and therefore just stuff to sift through. Since the beginning of the human race, we have been sifting through stuff, lots of stuff, eventually moved it into filing cabinets, now just stored digital, which should make the sifting process easier, but that is not always the case.

…And more than just about being smaller

I have no academic insight into what you describe Floortje, just practical experience. I absolutely agree that a side effect of the transformation process was replacing old equipment with a modern, smaller digital version, however that was only one very small benefit and as a benefit was way down the list of benefits. In fact, in the early days digital equipment was almost no smaller than analogue equipment, just had huge benefits.

I left school early and started work in September 1968 with the GPO (General Post Office), later became BT (British Telecom), as an apprentice. All telephones and switching equipment in those days were analogue, all the cables were copper wire wrapped in paper and covered in lead!! The clarity of phone calls was awful, because the speech path went through a copper clip that rotated through a contact bank – the equipment had existed since 1912. I spent many days cleaning the contact banks with Brasso and making sure the copper clip was adjusted not too tight (would cause a jam) and not too loose (making a poor noisy contact)

This is the equipment: https://en.wikipedia.org/wiki/Strowger_switch

The photo shows a mechanical Strowger switch – and brings back many happy memories.

It was not possible to self-dial nationally or Internationally, so calls had to be booked via an operator. Calling Internationally apart from being extremely expensive, was like speaking to another planet. Transmitting data was not even a possibility.

Although the transistor had been in first production in 1960, during my 7 years with the GPO, I saw tremendous digital transformation, which offered incredible benefits.

– The mechanical switches went to Crossbar – the first installed in the UK in 9th October 1968, still used relays but did not use a mechanical path for voice, however limited to 2,000 subscribers per telephone exchange. It was developed 100% privately funded by Plessey, then the GPO decided to adopt it. However, transitioning from Strowger took 20 years, so the old mechanical switches were having to be used by BT customers for a long time.

The advent of the first tone dialing phone – introduced in 1975 . http://home.bt.com/tech-ga

dgets/november-18-1963-push-button-telephones-introduced-11364015949159. This in conjunction with fully electronic exchanges (did not happen until I left GPO/BT), enabled folk to self-dial, nationally and eventually internationally.

The advent of the first modem…….the first BT modem was 1,200 bps, was 2 feet cubed and weighed about 30 lbs. I had the job of installing them and maintaining them in the Coventry area in the UK. Eventually BT released a 2,400-bps version, however stated they could not guarantee data speeds of 2,400 bps only 1,200 bps.

The next generation modems

The Racal Milgo engineer would install about 10 per customer at a time – standards did not exist in those days, so Racal had to install their equipment at both ends….the V29 standard came later. He would always take me to lunch in his super Racal provide car – they paid for all his meals and all his petrol!!

Eventually, this guy convinced me to join Racal and on my first day, Racal provided me with a super new estate car, all expenses paid and I worked really hard. So now 100% of my time was spent visiting Computer centers  – huge IBM mainframes.

What were they doing at those Computer centers – sifting data, using magnetic tapes and punch cards.

The spec of those computers makes me shudder today, how did the world do business (compared to what I am typing on today)…..they were mostly IBM 360 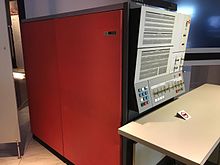 All they were doing Floortje was just sifting data!! Whilst digital transformation was taking place.

I left Racal Milgo in 1983 (it was perhaps the best company I have ever worked for), when modems were becoming cheaper and smaller and businesses wanted modems on dial up, until then data modems worked only on leased dedicated private lines. What did these companies want to do, interlink their remote office so they could ……..sift data.

Whilst at Tech Nel I managed my customers by sifting through data, it was stored on a small cassette tape (like those used in dictating machines). I plugged into a small keyboard that allowed a data search function, then I had to sit and wait for the tape to whiz back and forth.

I traveled within the UK and Internationally a lot and to keep in contact with my staff, I had a two-way radio fitted to my company car – installed by Securicor UK. A handset on the console by the driver, and a huge whip aerial mounted on the back side of the car. It was awesome, although only half duplex, the Securicor control center could patch phone calls through, or relay messages.

The radio waves from the UK just reached the shores of Holland and France, so whilst waiting for the ferries to come back to the UK, I would press the call button and a Securicor control center in the UK would answer, I would ask them to pass on a message. The first time I did that I just told Securicor to message my wife, that I was boarding the ferry at Calais. The Securicor guy went orbital, telling me it was illegal to use the service outside of the UK. I told him OK, but please pass the message on, which he did.

Then one day………Securicor gave notice that in one month they were closing the service down, because the frequencies would be used for the first mobile phone service in the UK- another great step forward in digital transformation. The Chairman of Tech Nel bought me one of the first phones – not portable at all, awful battery life, and for the first few years, no way as good and reliable as the two-way radio service had been.

The advent of the mobile phone marked significant progress in Digital Transformation.

Then Coherent headhunted me away from Tech- Nel, just as the Berlin wall etc. was falling…………………………………..Eastern Germany had stagnated since the end of the war, no telecom infrastructure existed, suddenly a lot of data needed to be sifted, the only way to quickly establish a voice/data network in Eastern Germany was via Satellite, Coherent had a new product that sat on their shelf – just what Deutsche Telekom wanted. I devoted 24 hrs. a day, 365 days a year, selling that product – even though I had the title Managing Director EMEA.

What is different today?

That will just enable folk to sift even more data

I have been working on technology that enabled businesses to sift data since I was 16. Yes over the years, they have been able to sift more data faster, and when the 100 Thz optical transistor processor appears – even faster 😊. The ability to have a terabit hard drive  in our laptops is relative new, our laptops now store a lot of data that often needs to be sifted.

I am very grateful that David Powell shared his life story with me. It made me realize, that product and service innovation go together, yet perhaps not simultaneously. It takes service firms and the market often a long time to realize what can be done with a new invention or breakthrough technology.

Keeping your eyes open for what is happening in the world of computers and trying to get a sense of what new trends are about, is the beginning of any innovation journey. Curiosity and imagination are the key drivers, as the Harvard Business Review recently wrote. 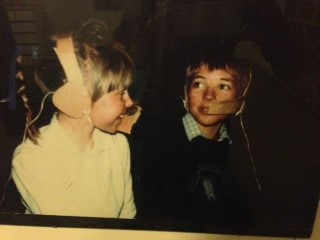 If you are wondering what the picture at the top is about. It is me and my brother playing the imaginary “Help Union” help desk. Must have been somewhere around 1977. The same time the technologies David is talking about, were evolving. I doubt my brother and I had never seen a real computer, let alone that we had any idea what a help desk was or did. Our task was to save any creature in any difficult situation by getting them the help they needed. Creating a “computer” from cardboard boxes was the most fun part of the game! Coming up with the stories was secondary.

David’s comments made me realize, how big the gap is between inventing new technologies, being just curious, and transforming novel opportunities into valuable services. Creating an imaginary solution from cardboard is so much easier!